To many readers, characters become real people over the course of a series.  Once the reader has laughed, cried, and gasped in terror alongside them for what is sometimes years on end, it can’t help but happen.  We have little fantasies in our heads in which we meet them.  They become good friends to us, people who understand what you’re going through because they went through it too.  They live in us as much as they live in the pages of the books they appear in.

Therefore, I think it’s awesome when fans come together to do something about these characters, to bring them to life in a new, fantastic way.  For instance, when I was younger the Disney Channel would make a different character available by email each week.  The characters would not be from their classic movies as much as their regular shows, but hey- I didn’t care.  I loved it.  It was so exciting to get letters from people I watched on TV.

Nowadays, yes, I realize they were probably pre-written emails and my fangirlish fan mail was sent and never seen again by human eyes.  But that made no difference to my younger self.

Now, one of my friends on Tumblr has found multiple different sites where eager fans of the Harry Potter series are orchestrating question-and-answer sort of sessions, posing as specific characters.  My friend was kind enough to give me the link to one such website.  All of the following photographs are taken from that site.  (I have to warn my more sensitive readers, though: some of the posts on that site are rather inappropriate.  Sorry.  I’ve been careful to re-post only clean ones, though.)

So, without further ado, look under the cut for my favorite responses from the Golden Trio Notes!

The great part about this Tumblr is that ANYONE can post a question.  This leads to some interesting subject matter, though perhaps not in the way that’s intended: 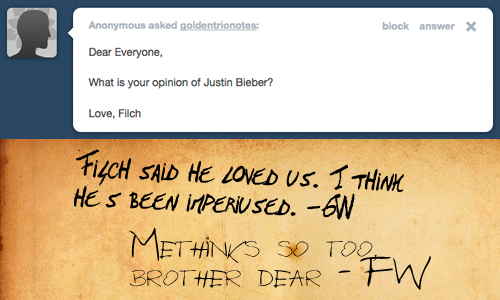 That would be George and Fred answering, by the way. Not Ginny.

This next asker (is asker a word?) makes a valid point:

Voldy's so thoughtful of Harry's education.

Most of the answers are very sarcastic and funny, including this one highlighting a part of the series that I, too, have wondered about.  By the way, this IS Ginny replying:

Draco is one of the funniest to respond:

Obviously he's going by the book here. In the movie they just walk away.

The next piece is AMAZINGLY BRILLIANT BUT PROBABLY NOT A COINCIDENCE:

The last response (because this post is getting really long) is a group effort: 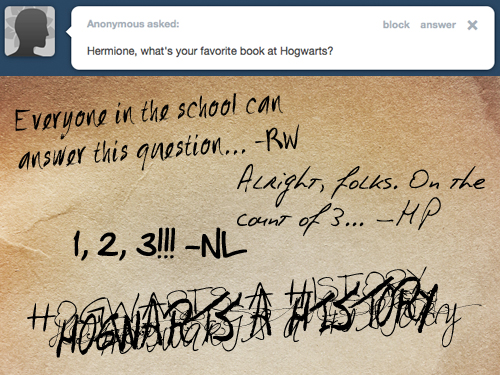 The point of all of these incredible Q&A’s is to be able to “talk” to your favorite characters.  And come on, who here hasn’t wanted to ask Draco or Snape or Harry a question?

The creativity of fans is brilliant.  I wish sites like these good luck and a long life.